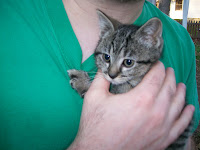 I dropped Evey the foster kitten off at the shelter today to get her exam and be ready for the surgery truck tomorrow. She'll have spay surgery tomorrow and go to the adoption floor right after. She'll be available to go home on Wednesday. We ended up having her with us for a whol 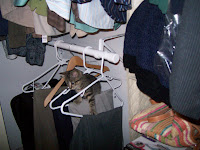 e month because she developed the sniffles and it took a while to get over them without resorting to drugs. We'd gotten quite attached to her but are also relieved that we managed to have our first successful foster. One of the pets broke her out of her confinement early on in the foster and so she freely mixed with our other cats and dog, a big no-no. Two of the cats are paying for it with the sniffles themselves but so far it hasn't gotten any worse and they should be fine. Our oldest cat is missing her playmate and was sitting at the front door looking forlorn for a while tonight. Did I say that we named her Evey after Natalie Portman's character in V for Vendetta because she was so fierce when she first faced the dog? Update: Alan informs me he named her Evey not for her fierceness but because she didn't realize her cage (small dog kennel) door was open the first few times we tried to let her out.

We still have 2 little girl fosters left (one of the vet techs named them Benoni and Lodi--apples?) from another litter which Alan has nicknamed the Fluff 'n stuffs. They came in feral, hissing and swatting. All the litter 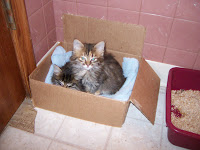 were variations on black or brown tabbies but one little orange tabby male. The orange tabby was friendly from the very beginning and won all of our hearts. They waited for a foster home for socialization and gaining weight for a long time but never went out, so I decided to take the 3 who remained after 2 hit the right surgery weight. The little orange one was losing weight in the shelter, a bad sign, and they all were showing symptoms of upper respiratory infections. We lost the little one the first weekend which was heart breaking, but I managed to nurse the other two through not eating and being so stuffy that their bodies shook with every breath. A combination of force feeding watered down canned food mixed with ground up lysine tablet, a nightly dose of doxycycline, saline nose drops, a humidifier and a lot of love seems to have gotten them through the worst. Sunday, they started eating on their own again. They are beautiful cats and will be probably be long-haired. Benoni is a tabby/calico mix with a cute little orange tip on her tail and Lodi is about a third size smaller and a black tabby. They will continue residing in our bathroom until they are symptom free and ready to go back to the shelter.
Posted by Kristin at 9:10 PM