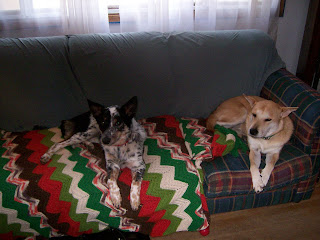 New Addition to the Household I'm sitting on the couch with the two dogs sleeping next me which is not the normal state of things the last two weeks. We had a pretty wild 1 year old Aussie Cattle Dog (Blue Heeler), Kachina, at work who had been sitting for quite a while despite her cuteness. At a year old, she had too much energy and no training and was a chore to handle despite a basically sweet nature. She was a pointy eared and nosed dog about the same size as our dog Gambit and their energy levels were close, so I remember thinking she might be a good match for him. Gambit's the type of dog who gets into trouble if he doesn't have enough mental stimulation and physical exercise. For instance, if I have work to do on the computer after a day at work and he hasn't gotten enough attention, he'll start pulling things off the tables and throwing them around or terrorize the cats or, if he goes out, will bark incessantly at squirrels and crows in the neighborhood. We were waiting for our new backyard fence to be installed and were talking about getting Gambit a companion. I never thought that Kachina would still be at the shelter but mentioned to Alan that if she was, we should take a look at her. 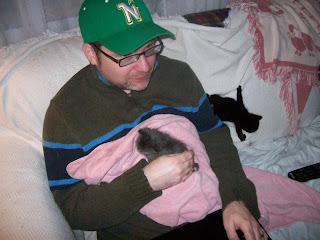 We also had a tough litter of foster kittens that had been home with us for over a month. I didn't blog at all about them because we weren't sure they were going to make it. The litter of four had been eating canned food when I took them home but it quickly became obvious that they weren't getting enough nutrition and I started bottle feeding them milk replacer. Pretty quickly there became a size difference within the group and two stayed pretty small. Within a short while, we lost one of them. It followed a familiar pattern of the kitten doing fine up to a day before and then eating only a little and then none at all and then crashing suddenly. We tried another de-wormer, Fenbendazole (panacur), and they all seemed to be doing better. We had to leave them in the care of one of my co-workers (and wonderful pet sitter) for a few days for World Fantasy Convention and when we got back a third kitten declined. This was one of the bigger kittens and it was really hard--I hate how helpless it makes you feel. 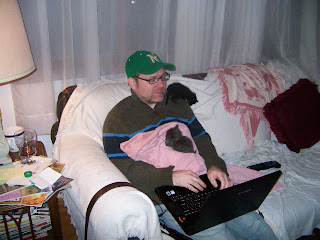 At this point, we hadn't named any of them. I think we knew from the very beginning that this would be a tough litter and naming them seemed too hard this time. We are at a very different place than we were a little over a year ago when we were just starting fostering and felt it was important to name all of them, even if they died before we could find the right name. I want to point out that most of the time fostering isn't this hard. I tend to take home the tough cases I don't feel comfortable sending with our regular foster parents. We lost that one, too, and were down to one little grey female and one slightly larger little black female kitten. They should have been up to 1.5-2 lbs but were hovering around 1 lb.

Finally, the panacur seemed to kick in and they started gaining weight. I was able to start mixing the milk replacer with boiled Royal Canin Babycat 34 and thicken the formula. The Royal Canin Babycat 34 is kind of a miracle food. Many kittens will skip right to it from nursing with their mother bypassing canned and other options. It makes weaning much easier in a lot of cases. It took forever for these two to start eating a thicker mixture out of the bowl. The little grey one started three days earlier than the black one. Once they could eat out of the bowl, things sped up and they didn't need the bottle any more after a few days. The key is to always have both the dry and the mixture available until they start eating it. The Royal Canin really packed on the pounds and pretty soon, Morgan and Merlyn were at surgery weight. We named them around the time I was laying out Cat Valente's Under in the Mere, hence the Arthurian inspired names! The two of them were bonded pretty closely but were also very independent and human focused. It was a nice balance where they could entertain themselves (mostly wrestling) and yet checked in often with us for attention and affection. I had the happy opportunity to see them go home together. I don't always think litter mates make the best adoption choice since they can be bonded more to each other than their human housemates, but in this case, I think they will be fine. The woman who adopted them said they decided they couldn't separate them when they were being held by different people, saw each other, and reached out towards each other. We had such a long haul with these two, I almost bust into tears when I saw they were beging adopted as a pair. 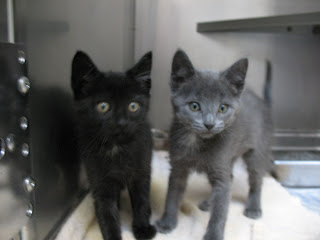 So, we had a fence installed, the house was clear of foster kittens and Kachina was still sitting in a kennel at the shelter. Alan came to visit and loved her, so we took her home for a trial stay. She is a huge handful, very jumpy and often mouthy, but very affectionate and it's obvious she loves Gambit. Gambit seems to love her most of the time but is also sometimes overwhelmed. They have already passed some bad habits to each other but they're workable. We're going to start training classes at my work on Monday with both dogs and see what happens. I have to finalize the adoption this week, so I think we've made our decision. 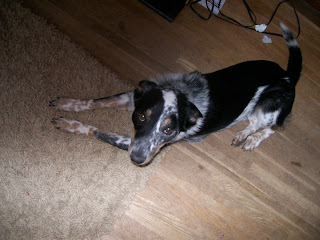 Thanks for the update and all the wonderful pictures and video! So happy to hear the kittens were adopted!!! Kachina looks like such a sweetie.

Anonymous said...
This comment has been removed by a blog administrator.
8:02 AM