We have a new foster kitten. His name is currently up in the air. I wanted to name him Rumble because he's such a purr machine. Alan wanted to name him Chester (which makes me think of old men.) He has an upper respiratory infection and a very runny nose but is otherwise acting like a normal kitten. He wouldn't hold still for the photos I took tonight. 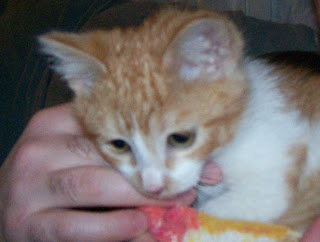 We'll try again tomorrow when the light is better and after we've had a big meal and he's sleepy.

Alan says he smells fresh like fabric softener (usually our fosters are a little stinky, especially if they are sick) and that he is pound for pound the cutest kitten we've foster. I'm not so sure about that (just look at the anime cute trio we had a few back) but people really do seem to like orange tabbies, so Alan's in good company. 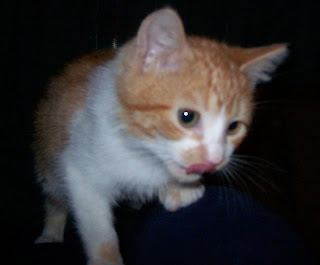 He likes to knead when he's being petted and is obviously missing his brothers who are probably already adopted by today.

Thank you for the pictures -- he's adorable!!! Oh my gosh, I want to put my face on his fur and smell the fabric softener. :-D