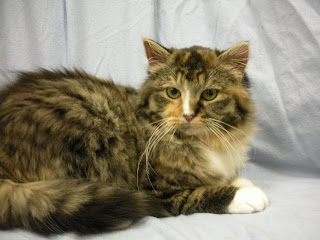 I just brought our 4 month old foster kitten, Spitfire, back to the shelter for spay surgery and to go to the adoption floor. We had her for a couple weeks for socialization and while she recovered from an upper respiratory infection. Spitfire came from an overcrowded living situation and while she was used to having her owner around the house, she wasn't handled at all. She was a spitting, hissing ball of fluff. She's the fluffiest kitten we'd ever had and looked over twice her 4 pounds. Under all the fur, she was very skinny. She gained a whole pound while she was with us and is no longer underweight. She's also probably the most beautiful kitten we've had with her white bib and paws, brown tabby stripes on her legs and tail and tortie coloring elsewhere. She's officially a torbie in our computer system but I prefer tortie-tabby. She should be appearing on the AHS website later this afternoon and she can go home tomorrow. 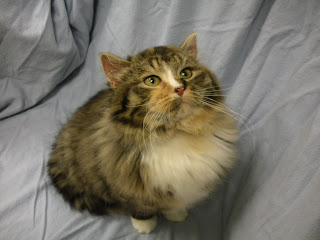 I knew we'd be fine because while she hissed and growled, she never did anything else, so you could pick her up. The first few days, she mostly hid in her box with her ears flattened. She came out occasionally to rub against Alan's legs and would alternate hissing, growling and purring. I knew we'd be fine when I saw that and heard the squeaking of the bungee mouse hanging on the door of her room in the middle of the night. Alan wanted to call her "Sink" because she spent a lot of the first week hiding in there. We had to move our toothbrushes into the kitchen. This last week, she's been pretty much a normal kitten, chatty like many torties, and even trying to escape out of the room to see our dogs. Despite occasional hissing when she's caught by surprise, she's the most gentle and good natured kitten we've ever had. I never once had to deal with her playing with claws or teeth. Growing up with a big group of cats must have really trained her well!

I'll be working the Walk for Animals this year but am raising money with the Woodbury staff team. Please consider making a donation! http://events.animalhumanesociety.org/site/TR/Walk/General?px=1007393&pg=personal&fr_id=1150
Posted by Kristin at 12:50 PM