Here are photos of a new litter of five foster kittens that I brought home for socialization and a little weight gain. 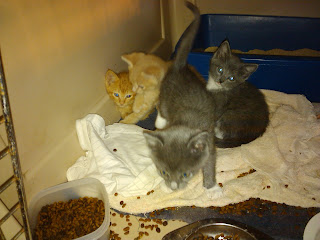 We have one buff tabby, one orange tabby, a solid grey spitfire and two other grey ones with white paws and bellies. They were hissing and spitting on Thursday night when I brought them home. I'm keeping them in a large dog kennel to get them used to being handled and being around people. 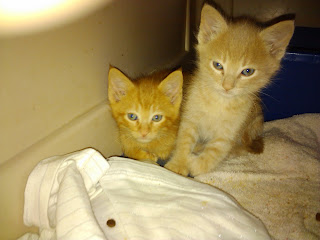 A couple of the kittens launched themselves at the closed door of the kennel when they spotted the dogs, spitting and hissing. It scared the dogs so much I had to walk them past the kennel to get them out of the room again. I wore leather gardening gloves at first but during the first day was already able to stop using them. 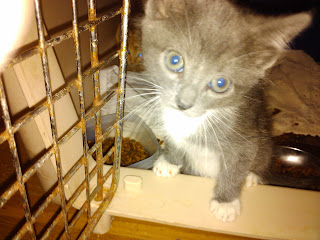 Most of the kittens are already purring up a storm when they are held. All of them startle easily and sometimes still hiss when surprised. 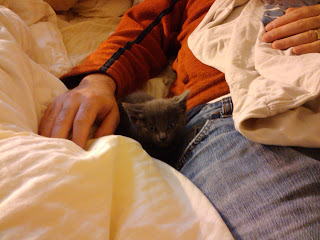 The solid grey kitten is the hold out and still hisses when you reach in to pick him up. Alan spent some extra time with him today. 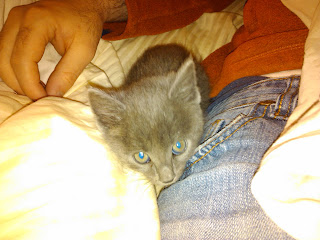 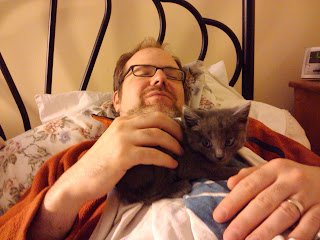 When given the choice of moving off our laps, though, he prefers to stay put rather than moving back into his safe kennel space and he does seem to enjoy being petted.
Posted by Kristin at 6:06 PM