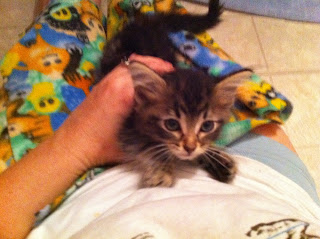 Foster kitten Smoke, who was still sitting at the shelter alone after his sister was adopted, was put on hold yesterday and taken home today. I got to say good-bye to him and meet his adopter. 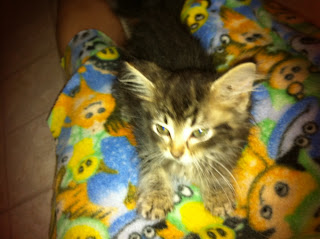 Yahya went back to the shelter on Tuesday for neuter surgery after getting the go ahead from our vet. While I wouldn't say he is nice and plump, he is a slim but healthy weight. It was amazing to watch how quickly his wounds healed up. We were thinking the largest one would need stitches once the infection cleared but it closed up nicely on its own. It was about the size of a quarter when I brought him home and within two days it was dime sized and when I returned him it was a dot. Today, it's completely healed and his fur is already growing back. He has white, light orange and dark orange fur all in that area and it looks really cool growing back. There are still 3 small scars where the bot flies were removed which are bigger than anything left by the large wound. When I left today, he was curled up on his fleece blanket with his green hippo stuffed toy. 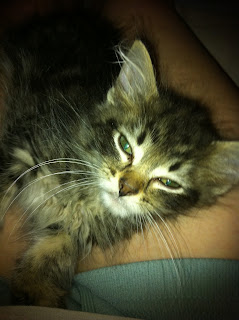 I brought Ben (in the photos!) home that same night I returned Yahya. He lagged behind his siblings in his prior foster home and they had to return him before going on vacation. He was steadily gaining weight in the shelter again so I have him for a while for weight gain. He's a tiny little thing compared to our last few but very loud. 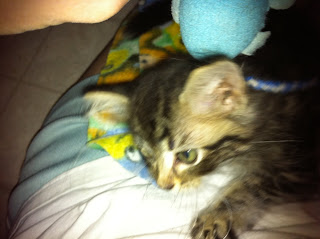 The oldest of our classic editions, as Alan calls them, Tora the 14 year old brown and white tabby is really sick. We have him separated from everyone else in our bedroom, mainly to give him space from the crazy dogs. He kept up us the first couple nights because his breathing was so awful. His lungs are full of fluid. He sounds better after a few days of meds which brought his temperature down. The emergency clinic diagnosed an upper respiratory infection but it's much worse and without the nasal and eye symptoms we usually see with URI. We're not totally sure what is happening but he does have some kind of respiratory infection as well as a UTI and asthma. The x-rays showed a lot of fluid around his lungs and possibly his heart. I'm worried about how congested his lungs still sound but he's eating well and trying to escape the room, so he must be feeling better. It's crazy how quickly cats can go downhill. One day he's getting a little matted, which was new and worrisome, and the next he's agonal breathing. It must be their small body size. We will probably be going back in sometime this week if he continues to sound so horrible. He is a house cat but did manage to sneak out an accidentally left open door and was out for a few hours earlier in the week. He's looking a little scraggly in this photo and I think this is the first time ever that he's actually looked like an elderly cat. He's starting to get old cat skinny hips. After kidney stones 5 years ago and a small cancerous tumor removed 4 years ago, he's had a pretty awesome run of health. The cancer was most likely injection site located cancer which has a very high recurrence. We've been very lucky up until now. 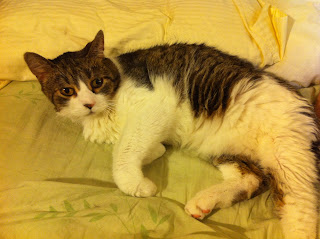 Needless to say we are being very careful to practice good hygiene to protect both the kitten and the sick cat from each other. We always keep the fosters in a separate room that is well-cleaned between uses. So far, neither of the other two classics are showing any signs of illness.
Posted by Kristin at 10:22 PM

Boy, is she cute.
Yep...
A lotta gobbsa felines where
Im going after death if ya wannum.
And you wanna follow...
cuzz the other realm aint too cool.
Nevertheless...

To weave an account of any consequence involves self-evident adaptation; a convincing culmination will further add a vast amount of attitudes/vitriol to the 'Animal House' which is the term EYE use for the literal Great Beyond:

So, why-O-why should U love our fuse-blowin, hot-shot, HOLEsumm-cage-match? Our abundant productivity coupled withe copious depth of the extraordinary? Our proFUSE NRGod which leeeds to explosive fairy-tales in the 'one-stop-shop' symphony? Our bombastic tenaCITY on a Hill which'll plant the Seeds 4U2 grow-up to great heights? Follow us on the journey Home...

CAUTION: our 22ish, wildchild, accurately-atrocious, off-the-reservation, metal-breadKrumm-blogazzzms R so boring, they're such an intimate wealth of bottomless residue; however, my just and groovy earthling, who else hast actually SEEN the Great Beyond in person & lived to tella youse bout the bionic, bloated, brevity-like-earth we're living on, almost salivating4salvation?? So, gain altitude, never attitude: death has no favorites.

If the Great Beyond's an ultra-great-reward, and not everyone enters, why is it an excruciating deluge of epic caliber where the quality's a limitless bulldozer pushin-your-power-cord with eternal goodies?? The Prize-a+-TheEnd-of-Reality just gives U.S. moe-curley graphiXX which few R asking 4 anymoe. They're too concerned withe grotesque sanity of the ambivilant PISSANTS! which crawl like lemmings to their doom!

THANK GAWWWD!!! the Don has the ebullient BAWLS!!! to say the Manifest Destiny!!! To lead us forward to the White House Upstairs with his SQUARES!!!

So, break-free, earthling: be like a contraversial outgrowth of incredibly-intoxicating-effusiveness in your zeitgeist. Wanna join this useFULL idiot Upstairs 4 the most zany, kooky, handcrafted antidotes? Extremely exquisite & explicit endorphins in abundance? Puh-lenty of pulverizingly-tantalizing ex-psycotics with esoteric tics? i2i-kick-ass-ultra-maximum-rocket-fuel-party-hardy at my pad ya ever encountered without d'New Joisey accent 4 an eternal slew of precarious, magnanimous and primeval absurdities indelibly etched in the Granite Corridoors of our eternity with a total-barrage-of-melt-in-thy-mouth infinite indulgence ...???