Yesterday, I brought two kittens back to the shelter for spay and neuter surgery, a full week after their sister, the little fatty, Rosie, was adopted. Ember and Smoke http://tiny.cc/zt96c, as of close time tonight, were both still available and showing up on the website. Ember has some of the most beautiful tortie coloring I've ever seen. Smoke is a huge cuddler and is also very pretty with black fur sprinkled with wisps of white. I kept them a little longer than I had planned because our surgery list was very long and crammed with other kittens earlier this week and I found out they both had roundworms. 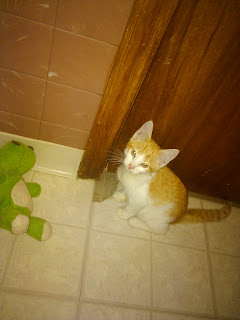 WARNING: THE NEXT PART OF THIS POST IS VERY GROSS BUT ENDS WELL.

I had hoped to get them back on Saturday so I could take Yahya home sooner. Yahya, a male orange and white tabby kitten came into the shelter a mess. Staff pulled 3 bot flies (cuterebra) out of his neck. (Don't google cuterebra if you are squeamish--they are the closest thing to Aliens I've ever seen!) He also had a large, wide open wound on his neck that was surrounded by necrotic tissue and infested in maggots. It may have been a bot fly hole that got torn and/or infected. He was skinny and scraggly and the most pathetic kitten I've ever seen. The bots were some of the largest we've ever pulled out of an animal and were probably making it difficult for him to swallow. I washed the wounds--Yahya was amazingly well behaved in what was basically a very intrusive and long bath with lots of probing of sore places--and the vet gave him something for parasites and prescribed an antibiotic. I learned that I'm really not that bothered by the creepy crawlies in the wounds especially since I told myself the maggots only attack dead tissue. (I found out later that that wasn't necessarily true but they did seem to be only around the dead tissue in this case.) Over the next week, the bot fly wounds healed quickly--it's amazing how quickly they heal--and Yahya had to put up with the vet debriding the large wound and daily cleaning. 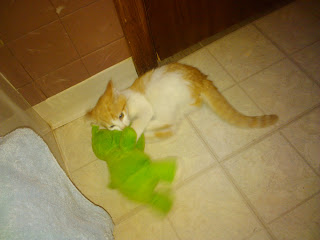 By this past weekend, we were able to stop debriding. The scab is only about the size of a nickel now and it's surrounded by pretty new pink skin. He's still sloughing some of the dead skin but is looking like a kitten and not a walking wound now. During all of this, he was a trooper but he got a little scared of people since the treatment was probably painful. He's home with us now to gain some weight and learn to trust again. The vet thinks he only will need about a week before he can return for neuter surgery. We're hoping his testicles will deign to drop by then as he's now cryptorchid. (We originally thought he was a she because of that and who really wanted to subject him to more probing after everything he'd been through that first day?) 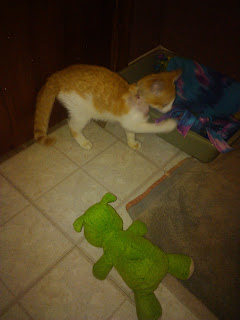 missed this the first time, but ew.

My mom's cat (coincidentally an orange tiger as well) is only really affectionate when he has something disgusting my mother needs to take care of (matts, fight wounds, etc.) The day he jumped on her lap with a warble in his throat lives on in history--it was causing necrotization in the area and STANK. He was taken to the vet immediately. They were also grossed out, apparently too much so to actually examine him--they just diagnosed him from across the room, and kept him for the surgery (one reason why my mother is not all that fond of the vets there anymore). I was never so glad to not be living at home.

But he is a big orange bastard, and deserves misery in his life from time to time. Your poor baby did not. SO SAD. (I would totally get him for my mom if he was on the same coast as us. :)